Over 60 Restaurants Will Compete for The Best Burger in Philly at this Year’s Burger Brawl! 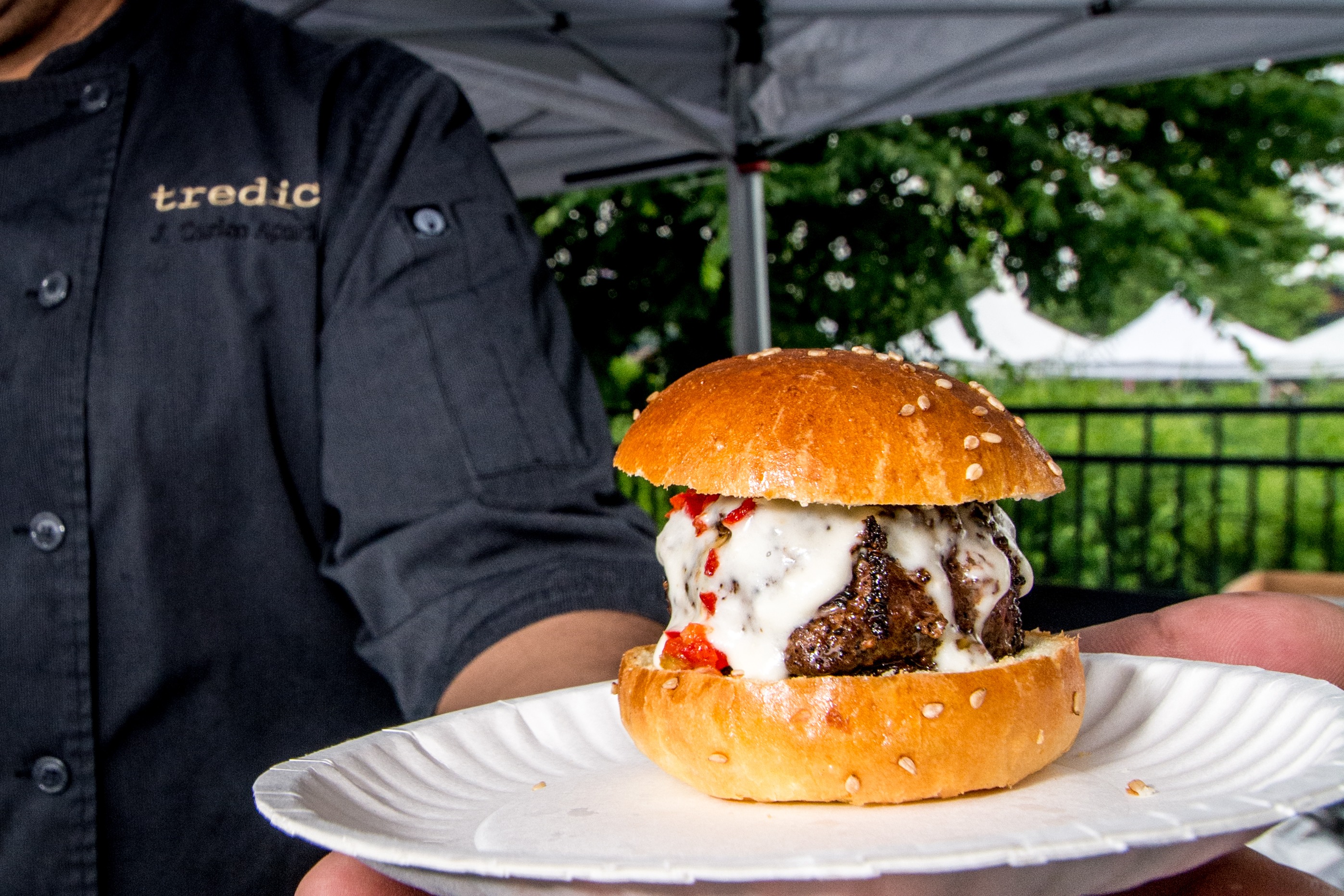 Over 60 Philadelphia region restaurants will fire up the grills and battle for burger bragging rights at the 9th Annual Philadelphia Burger Brawl presented by Jim Beam. The grills come out and the gloves come off on Sunday, September 15, 2019, with VIP gates opening at 1:00pm and general admission opening at 2:00pm. The region’s largest food competition will move to a larger new space and take over the Marine Parade Ground at Navy Yard Philadelphia. Attendees are invited to enjoy all-you-can-eat samples of the very best burger in Philadelphia and then vote for their favorite. Food critics, writers and celebrity judges will also name one winning burger, “Judge’s Choice.” Restaurants and bars may compete in the Cutthroat Cocktail Competition, sponsored by Jim Beam. Tickets are on sale now at phillyburgerbrawl.com for $45 for advance general admission (or $50 at the door) which includes samples and one free cocktail. VIP tickets are also on sale for $100 with perks like early entry, a VIP lounge and unlimited drinks. Children under 10 are free, no ticket required. Children must be accompanied by an adult. Twenty-one with identification to drink. Parking is free. Event is rain or shine. All proceeds go to The Fund for the School District of Philadelphia to support hardware needs to implement math and reading literacy programs in underserved elementary schools.

“Philadelphia Burger Brawl is back again with two exciting changes — an all new date in the fall and an all new, even larger location at Navy Yard Philadelphia,” said volunteer Organizer and Founder Rob Wasserman. “We are ready to bring on the sizzle as we help feed literacy and support underserved elementary schools in Philadelphia. This year we are proud to have support from 60+ restaurants that will bring their culinary talents and passion to the Navy Yard. Be prepared to come hungry as they wow us again at the grills. While nothing beats walking away with Burger Brawl bragging rights, we are all actually winners as we raise tens of thousands of dollars together for an amazing cause near and dear to our hearts.”

For 2019, look for a who’s who of top restaurants, eateries and bars spanning across the region, from Center City to South Jersey, the Main Line to the Northeast, and everywhere in between. Top food neighborhoods and towns are all represented including Queen Village, East Passyunk Avenue, South Street, Midtown Village, Fishtown, Northern Liberties, Ardmore, University City, Kensington and many more.

All competitors will compete for the coveted trophy and title of Judge’s Choice. For 2019, judges will again select 1st place, 2nd place and 3rd place prizes. The esteemed panel of judges will include over 40 members of local and regional press, members of Philadelphia’s restaurant community, representatives from the Mayor’s Office and the Philadelphia School District, local celebrities, and local tourism officials. New in 2019, top local influencers will select the top winner (plus second and third place) for Instagrammer’s Choice factoring in Instagram-worthy looks and presentation, and must-try taste and flavor. Guests will also place their votes for their favorite burgers to select the People’s Choice Winner.

On top of a great day of food, drink and friendly competition, Burger Brawl attendees can rock out on the Marine Parade grand lawn with tunes from Beasley Radio Group’s family of stations, with talent on-hand from 93.3 WMMR, 95.7 Ben FM, 102 WMGK, 97.5 Fanatic and WXTU. Don’t forget to smile for the camera as Philadelphia’s favorite social photographer Philly Chit Chat Hughe Dillon will also be there to document the day!

Tickets for Burger Brawl are on sale now at www.phillyburgerbrawl.com. VIP tickets are $100 each, and include early access at 1:00pm, access to the VIP Lounge, open bar, unlimited burger samples and free parking. Advance general admission tickets are $45 each, and include access at 2:00pm, one free beverage, unlimited burger samples and free parking. General admission tickets at the door go up by five dollars to $50. Children under 10 years of age are free, with no ticket required. Event is rain or shine.

Since its inception in 2011, Philadelphia Burger Brawl has raised $283,000+ for The Fund. Past proceeds have helped fund the purchase of Chromebooks and associated equipment in many Philadelphia Schools. The hardware has enabled schools to implement curriculum plans where the hardware requirements were otherwise unfunded.

For the full story about how Burger Brawl feeds literacy and education in Philadelphia schools, visit the Burger Brawl website about page at: http://phillyburgerbrawl.com/about/ .

For 2019, the School District issued a new Request for Information to learn about how Philadelphia schools can best utilize this year’s Burger Brawl funds. Twenty-three schools, ranging from K through 8th Grades, responded and detailed their plans to increase student engagement and achievement across all subjects, in a variety of ways. All projects combined totalled nearly $130,000. Examples of uses include implementing blended learning in reading and math, increasing student collaboration in all subjects, expanding coding, using G Suite, small-group instruction, engaging students in peer-to-peer activities, inquiry-based learning projects and problem-solving. The School District will narrow down and prioritize projects for distribution of this year’s Burger Brawl proceeds.